A game changer for Covid testing 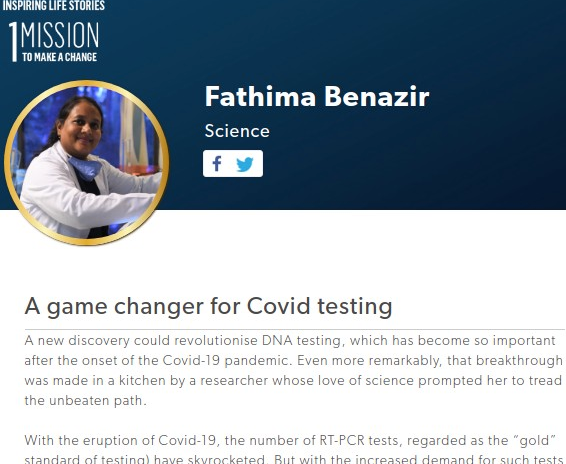 A new discovery could revolutionise DNA testing, which has become so important after the onset of the Covid-19 pandemic. Even more remarkably, that breakthrough was made in a kitchen by a researcher whose love of science prompted her to tread the unbeaten path.

With the eruption of Covid-19, the number of RT-PCR tests, regarded as the “gold” standard of testing) have skyrocketed. But with the increased demand for such tests there are also increased lab and environment hazards. This is because the fluorescent (or fluorophore) dyes used in the testing of nucleic acids such as DNA and RNA, are often heavily toxic to lab staff and pose a serious problem when it comes to disposal.

A new non-toxic fluorescent dye invented by a Bengaluru-based scientist could potentially revolutionise how this testing is done in the near future.

Fathima Benazir, 42, a molecular biologist by training, always knew that she wanted to be a scientist, but that it was ultimately a failure to get into an MBBS programme (by a 2% margin), which pushed her towards biotechnology.