Six hexacopter drones have been deployed; each can cover an area of about 6 m/s, can carry 15 litres of disinfectant 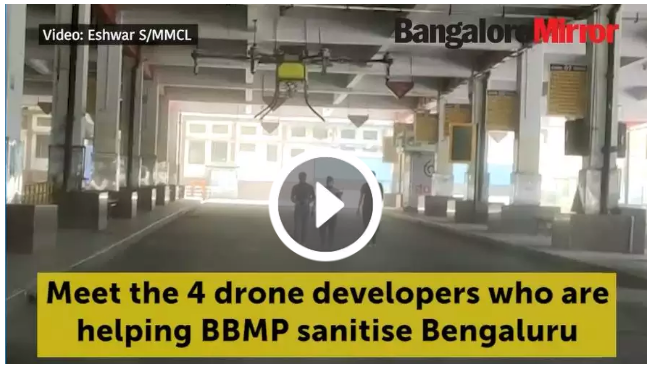 While the whole city has come to a standstill following the lockdown to contain the spread of the pandemic, a team of four drone operators has been moving from one locality to another to disinfect the city.

The four of them – Neel Sagar G, an aerospace engineer, Nishanth Murali, a civil engineer, Vinay Kumar, an aeronautical engineer and Naga Praveen, an electronic engineer, all in their early 20’s, have been roped in by the Bruhat Bengaluru Mahanagara Palike () to disinfect places like markets, bus stands, and railway stations.

Neel Sagar, founder of Alpha Drone Technology, the drone startup which has been hired by the civic body said that six hexacopter drones have been deployed to carry out the job.

The hexacopter with six propellers can carry 15 litres of disinfectant and fly upto 20 to 25 feet. The team has deployed six drones which can operate for about six to seven hours a day.

Each morning the team is handed out a schedule by the BBMP indicating which areas they have to cover. Their work starts at around 9.30 am and they travel all over the city before winding up at around 5.30 pm. The four drone operators are backed up by more four members who are in charge of the ground station.

“About six months ago, we designed and developed the drones with the help of the General Aeronautics of the Indian Institute of Science. The Indian Institute of Horticulture had roped in Alpha Drone Technology for carrying out pesticide spraying activities in the state. As we had a proven record we were asked to perform the task following the Covid-19 outbreak,” Neel Sagar told Bangalore Mirror.

“We quickly made a specially designed model for the disinfection of public places in the city. We made a wider nozzle in order to cover a larger area. One battery can power a drone for 25 minutes. The drones cover an area of about six metres per second,” he added.

The drive to disinfect using drones started on March 24. A team of drone operators carried out the disinfection drive at Vasanthnagar, Vyalikaval, Sadashivnagar, the Market area on Sampige Road and flower market on Temple Street Malleswaram, 😯 feet road in Dollars Colony, Yeshwantpur Railway Station, Bangalore Cantonment Railway Station, BBMP offices and other localities around the city.
.

The team has designed and developed the drones in-house and says that the battery too has been sourced indigenously.

The team has designed and developed the drones in-house and says that the battery too has been sourced indigenously.

Drone operators say that using drone technology to disinfect public spaces in urban areas is a wise move as apart from covering much larger areas they cover both land and air.

Though the BBMP has not fixed the fee for their services, the team has volunteered to do the disinfecting of the city.