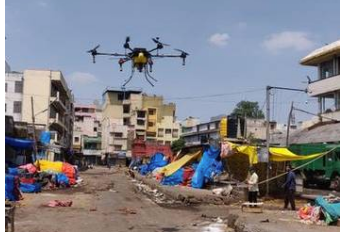 In June 2018, a Bengaluru-based drone tech start-up had given a demonstration in Dakshina Kannada district on the use of drones for spraying copper sulphate solution to protect arecanut crop from fruit rot disease.

the changed situation post-coronavirus outbreak in the country, the start-up has pressed its system for spraying disinfectants in one of the major metropolitan cities in the country — Bengaluru

In the changed situation post-coronavirus outbreak in the country, the start-up has pressed its system for spraying disinfectants in one of the major metropolitan cities in the country — Bengaluru.

Abhishek Burman, founder and CEO of the drone-tech start-up General Aeronautics, told BusinessLine that his start-up did a lot of agri-related trials in various parts of Karnataka. The start-up is using the same system that is being used for agriculture.

He said the use of drone makes a lot of sense because it can cover larger areas of land in significantly less time than what can be achieved by human sprayers. “Overall, this system could be 25 times more efficient compared to existing manual practices,” he said.

Apart from this, drones can reach areas that are unreachable or difficult-to-reach on foot or by vehicles. Another important factor is that the use of drones reduces the risk of contact for sanitation workers.

Burman said his start-up, in association with BBMP (Bruhat Bengaluru Mahanagara Palike), would have done around 75 sorties in the last five days. Asked about the extent of area covered in each sortie, he said it varies depending on the area. It has covered a maximum of around 5,000 sq metres in one sortie till now. However, the system is capable of spraying about 12,000 sq metres in one go, he said.

Some of the key areas covered in Bengaluru include KR Market, a congested market/residential area; Majestic, the city’s transportation hub; Nandini Layout, a residential colony; Commercial Street, a crowded business area with dense residential areas nearby; and Bowring Hospital.

He said General Aeronautics would have covered a minimum of 1,00,000 sq metres till now.

Burman said General Aeronautics, which is incubated at the Bengaluru-based IISc, was set up with a focus on providing solutions in the areas of agriculture and medical cargo delivery.