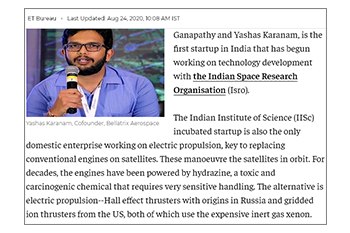 Bellatrix Aerospace, founded by Rohan Ganapathy and Yashas Karanam, is the first startup in India that has begun working on technology development with

The Indian Institute of Science (IISc) incubated startup is also the only domestic enterprise working on electric propulsion, key to replacing conventional engines on satellites. These manoeuvre the satellites in orbit. For decades, the engines have been powered by hydrazine, a toxic and carcinogenic chemical that requires very sensitive handling. The alternative is electric propulsion–Hall effect thrusters with origins in Russia and gridded ion thrusters from the US, both of which use the expensive inert gas xenon.

The Bellatrix electric propulsion system consists of microwave plasma thrusters powered by water. It is eco friendly and has a better thrust-to-power ratio than the existing electric propulsion engines, said Karanam. CEO Ganapathy has patents on the technology and is working with Isro to deploy in one of its satellites..

The Best on Campus award came down to a close contest between two space-tech startups, with the jury extensively discussing Bellatrix and Pixxel. In the end, the jury leaned toward Bellatrix for its contract with Isro, impressive for a company that had started life on campus.

“I was surprised initially to see the amount of space technology companies there,” said jury chair Rajesh Gopinathan, CEO of Tata Consultancy Services.

Karanam said India’s space prowess is already recognised globally and the opening up of the sector helps private firms offer their products and solutions to global customers.

“We have a lot to offer to the world,” he said.

The Bengaluru firm says it’s also developed a green fuel that’s 30% more efficient and nontoxic that can power conventional engines on satellites. Bellatrix has raised over $3 million in funds from

“In the wildest of my imagination, I wouldn’t have thought that someone on our campuses was thinking about a technology for alternate propulsion in space. It’s amazing,” said a jury member.

The space tech startup has already set its ambitions high. It is already working on a smaller version of the electric propulsion system for Nano or cube satellites, a segment that is growing globally. Bellatrix is designing a small rocket that can take a 150kg satellite up 550 km into space.

Pixxel | Awais Ahmed & Kshitij Khandelwal Pixxel is a spacetech startup building a constellation of earth-imaging microsatellites. Its first satellite, which will cater to customers in the oil and gas, weather monitoring, mining and agriculture sectors, is scheduled for launch in November. Pixxel plans to have a constellation of 30 such satellites in the next few years.

Chakr Innovation is a clean-tech firm that manufactures a novel device to convert soot from generators into ink. It allows sustainable and environmentally friendly power generation and has found buyers including the Indian Army.