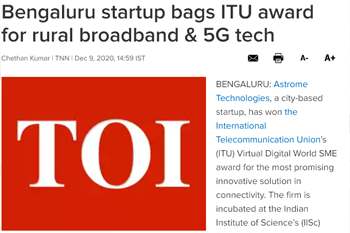 BENGALURU: Astrome Technologies , a city-based startup, has won the International Telecommunication Union ’s (ITU) Virtual Digital World SME award for the most promising innovative solution in connectivity. The firm is incubated at the Indian Institute of Science’s (IISc) Society for Innovation and Development (SID). Astrome won the award for its Gigamesh wireless-fibre product that accelerates the deployment of 5G and rural broadband infrastructure

Astrome has pioneered a multi-beam E-band product, GigaMesh, that packs six point-to-point E-band radios in one thereby distributing the cost of the device over multiple links.

“…This award is a strong validation that our technology and product is desired globally to bridge the digital divide, it also encourages us to scale our business and reach its maximum potential,” Satak added.

Venkatesh Kumaran, president, Astrome said the award reiterates that the problem the firm is solving is really big, and that it would have a great role to play in rural broadband infrastructure and upcoming 5G deployments.

“The ITU Telecom World Awards rewards inspirational ICT innovation and looks for the next generation of social technopreneurs between 18 and 30 years with solutions to developmental challenges. It is an opportunity to recognize innovative tech solutions, build resilience and foster investment in tech SMEs in the midst of this crisis,” the statement added.

Astrome, the statement added, is pioneering the future of millimeter wave wireless communication – be it on earth or from space.

“GigaMesh is its first product that solves the network congestion problems in 4G infrastructure and paves the way for 5G by providing fibre-like backhaul capacity wirelessly. GigaMesh is also ideal for extending the range of fibre to support rural infrastructure growth,” the statement added.

Astrome, the statement added, is pioneering the future of millimeter wave wireless communication – be it on earth or from space.

“GigaMesh is its first product that solves the network congestion problems in 4G infrastructure and paves the way for 5G by providing fibre-like backhaul capacity wirelessly. GigaMesh is also ideal for extending the range of fibre to support rural infrastructure growth,” the statement added.

NEW DELHI: A recent revival in Indian exports is under threat because there aren’t enough shipping containers to get the goods across the sea.

Shipments of certain goods, especially sales of packaged foods, had surged in recent months as more people eat at home during lockdowns, boosting expectations of a busy Christmas season. But the global impact of the coronavirus on trade and a slump in Indian imports have led to a shortage of incoming shipping containers, boosting freight charges about seven times.

Vimal Agro Products Pvt, which exports goods like canned mangoes and pickles to the Indian diaspora, said orders that were intended to arrive in Australia and New Zealand in time for Diwali reached only after the Hindu festival. While the company can’t share details on Christmas orders due to client confidentiality, there’s concern of a “big impact” if the container shortage persists, according to Chirag Nemani, vice president for marketing and sales.

Global trade is being roiled by a shortage of containers because dire predictions of a collapse this year that prompted carriers to cancel sailings have proved too pessimistic. India’s situation is worsened by geopolitical tensions with China that have reined in imports — and subsequently incoming containers — even while exports are recovering.

India’s exports in terms of volumes grew 24% July-October, while imports reduced 28% from the previous year. Due to this, companies which used to ship out empty containers from India had to now bring them into the country and move them inland where factories are located at a huge cost, according to the country’s Container Shipping Lines Association.

Vimal Agro’s freight costs have doubled to $1,800 per container for the UK and charges have gone up three times to $1,500 for Australia. Capital Ventures, which sells spices, bakery goods and staples under the Parliament brand, is paying $200 for Singapore where it was earlier $20 and $700 instead of $200 for

Organic Tattva, which is reporting a 50% increase in sales of organic foods to retailers including Costco Wholesale Corp. and the UAE-based Lulu Group, said shipments would have been 20% higher if it weren’t for India’s harsh lockdown that hit the availability of manpower and now the container shortages. The US contributes 40% of the company’s revenue.

“The shortage of containers started a few months back and has exacerbated in the last few weeks,” said Manish Sharma, a partner at PwC India . “Unfortunately, this has come even as our exports were picking up, so on top of an economic shock we now have a logistics-induced challenge.”

India’s overall shipments in value fell 5.1% in October, though food and beverage sales rose about 32%

Sharad Kumar Saraf, president of the Federation of Indian Organisations, said the industry body has been informed that the government is asking shipping lines to arrange for 100,000 containers per week.

“The waiting time for containers is currently two weeks or more, while normally it is 1-2 days,” said Saraf. “This will definitely impact Christmas orders.”

Masters’ Union School of Business, based in Gurugram, was all over the news last year for its Rs. 300 crores funding and its launch in September 2020. The school now has admissions open for its new batch; deadline is 31st January. The school promises a tech-focussed MBA that is going to be led by practitioners with an internship-style curriculum.

Its 16-month PGP-TBM attracted a lot of industry leaders as well as quality applicants. The institute announced its batch statistics around its launch and the batch quality was impressive. With students coming from top corporates such as McKinsey, Goldman Sachs, etc. with work experience going up to 13 years and the average last drawn salary being 10.5 LPA. 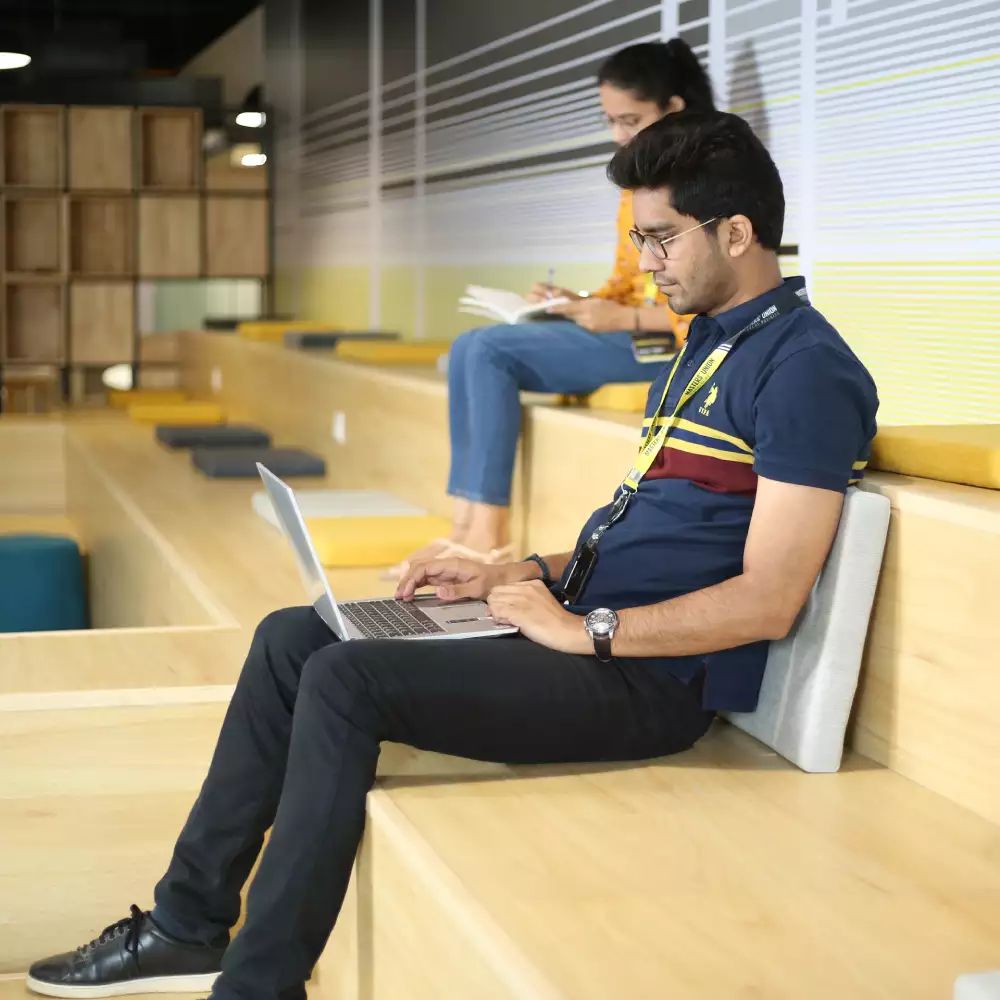 The batch is extremely diverse in terms of educational backgrounds, professional backgrounds, work experience as well as demographics. Only 31% of the students come from an engineering background while the rest represent non-technical disciplines such as arts, politics, hospitality, and commerce. They have an average GMAT score of over 700.

The application form is quite holistic, and the selection quite rigorous. The applicants are evaluated according to their application form (inclusive of an essay), their performance in MU-BAAT(the institute’s own aptitude test), and a personal interview with the Masters. The acceptance rate this year was recorded as 11.4%.

The programme especially attracts applicants for its Industry Immersions like its student-managed investment fund with a corpus of Rs. 5 cr and its own student-run incubator called Innovation Lab. Both were launched in November by Alok Saraogi, the Ex- Country Manager of Amazon Inc.

The Immersions include a personal Master-Mentor for each student, CXO shadow modules, tech- boot camps, corporate field courses, and more. Given the quality and experiences of the batch, the institute encourages peer-to-peer learning and students can often be found leading sessions for other students to learn about their particular domain expertise. 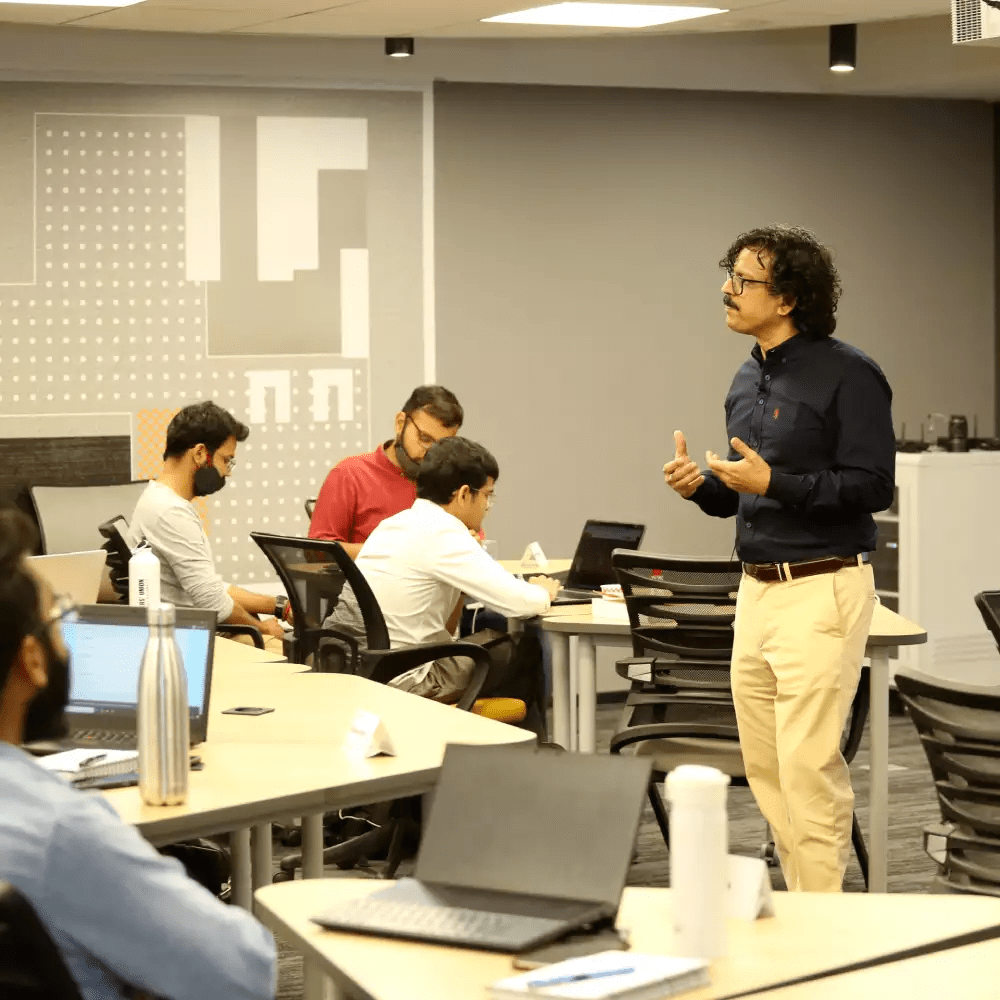 The Project Director and the founder of Outgrow and the Neta App, Pratham Mittal said, “While academic brilliance is a given at this level, we were looking for candidates who have gone beyond the norm in search of something interesting, have an appetite for the extraordinary, and are looking to do something path-breaking in their careers. We are lucky to have been able to onboard 60 such learners. They will now benefit from the diverse expertise of our exceptional masters, all of whom are leaders in their respective fields and institutions by themselves.”

The deadline for putting in applications for admission to this school is 31st January 2021.

Disclaimer: This article has been produced on behalf of Shanti Informatics by Times Internet’s Spotlight team

NEW DELHI: Equity indices continued to surge on Wednesday with the benchmark BSE sensex rising nearly 500 points to settle above 46,000-mark for the first time ever amid persistent foreign fund inflow and positive cues from global markets.

Top gainers in the BSE pack included Asian Paints, Kotak Mahindra Bank, HDFC Bank, Infosys, Axis Bank and Reliance Industries with their stocks up as much as 3.59 per cent

On the NSE platform, all the sub-indices finished in green with Nifty Media leading the pack by jumping as much as 3.77 per cent.

“Persistent FPI (foreign portfolio investor) flow remains a dominant factor for the markets. Given strong visibility of sustained earnings growth in 2HFY21 led by continued traction in business activities for many sectors, markets are likely to remain buoyant,” he said.

FPIs were net buyers in the capital market as they purchased shares worth Rs 2,909.60 crore on a net basis on Tuesday, according to provisional exchange data.

India’s health secretary said on Tuesday the country may approve some coronavirus vaccines over the next few weeks and an estimated 300 million people would be inoculated in the first tranche.

India has the world’s second-highest virus caseload behind the United States, but daily cases have stayed below the 50,000-mark since November 8, despite a busy festival season that saw crowded markets and streets.

“The vaccine news is a sentiment booster. But it is gushing liquidity that is supporting markets, we are seeing risk-on sentiment building up globally,” Aishvarya Dadheech, fund manager at Ambit Asset Management in Mumbai told news agency Reuters.

Global equities traded higher on Wednesday, after Britain started mass-vaccinating its people using a fully-tested Covid-19 shot and as Johnson & Johnson said it could obtain late-stage trial results for a single-dose vaccine earlier than expected.

(With inputs from agencies)